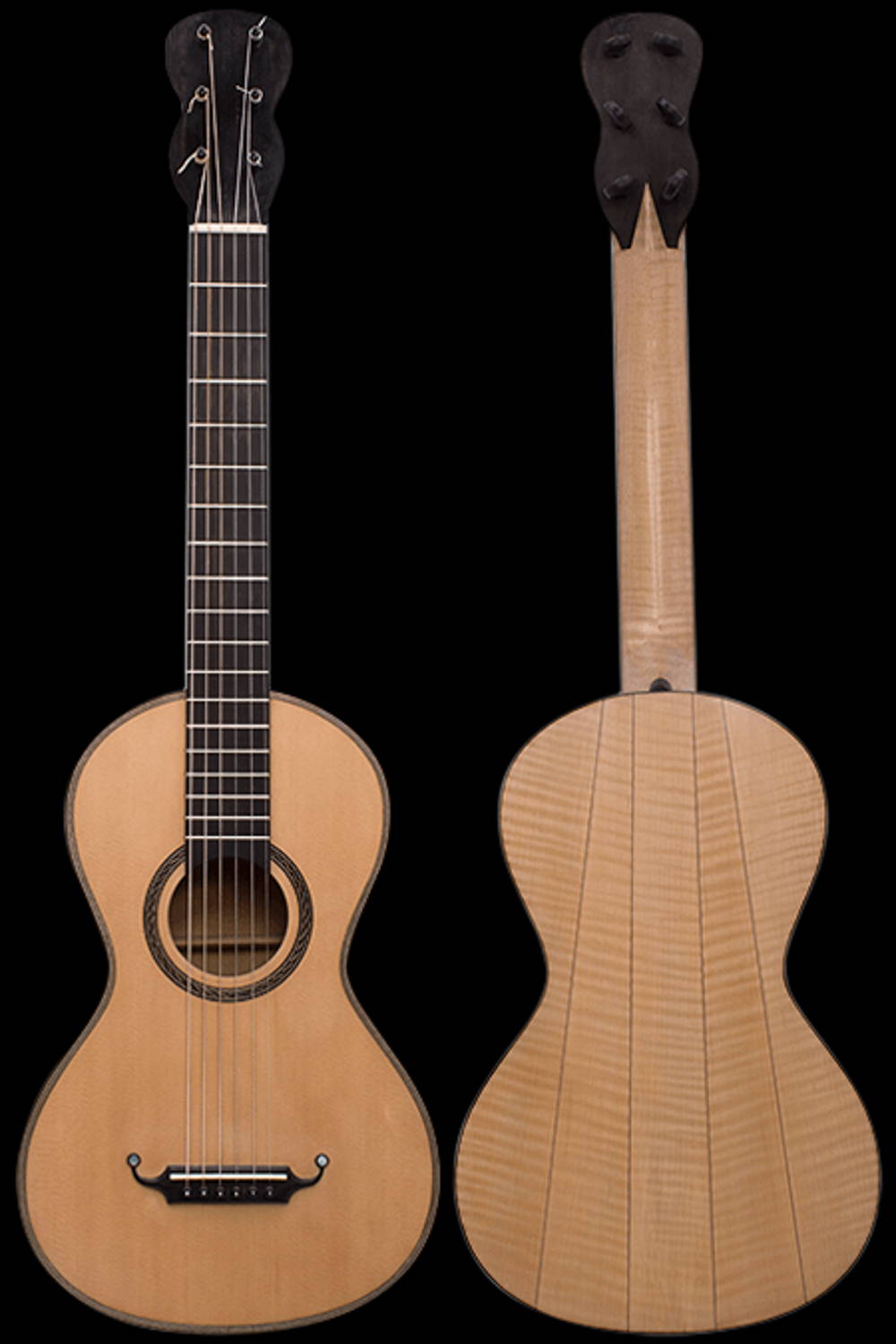 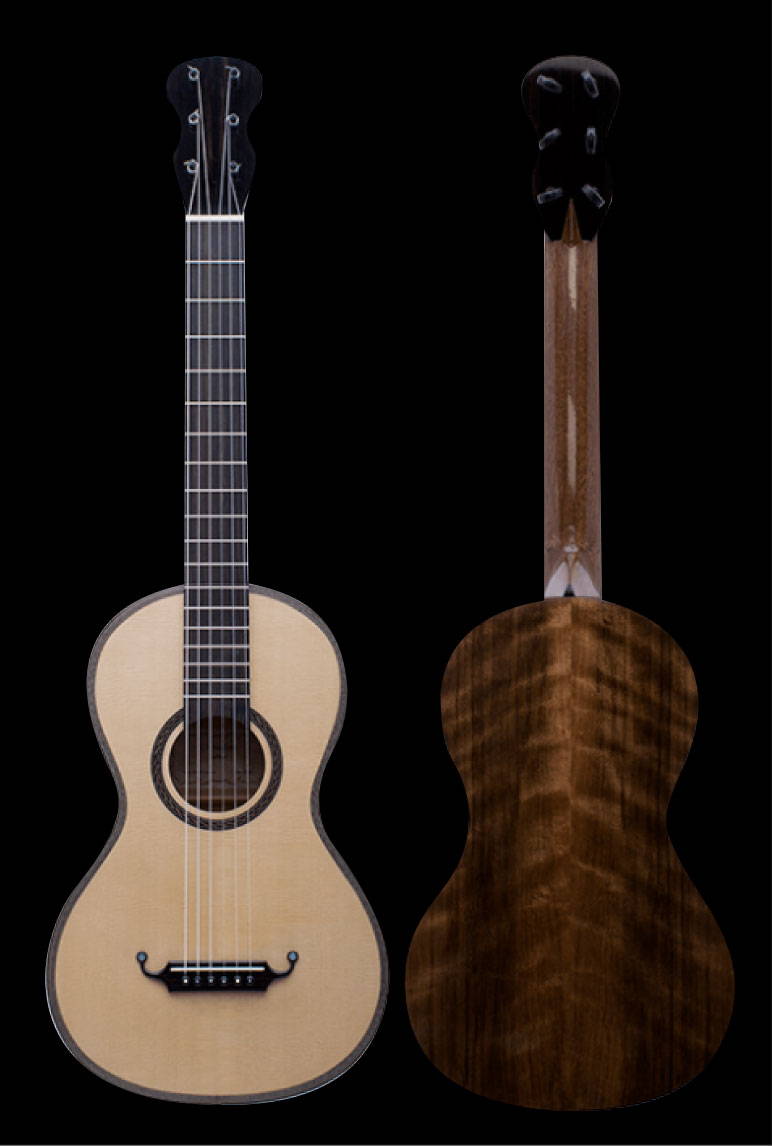 My Lacote style romantic guitars are inspired by the great French guitar maker Rene Lacote. I have strived to adhere to the major building practices of the period, however, I have also taken the liberty to enhance or improve on the overall build by introducing some new methodologies. My goal was not only to get the most sound out of these great guitars but also to make them easier to maintain, tune, and travel with. For instance, Lacote utilized a very shallow V mortise and tenon for his neck joints, and often secured it to the body with nothing more than hide glue. Some other romantic builders employed cut nails to hold the neck in place or, like Stauffer, used a mechanism which not only allowed for easy removal, but for neck angle adjustments. In lieu of these traditional methods, I’m employing a bolt-on neck and am not gluing the fretboard to the top. This approach affords the capability to easily remove the neck and break down the guitar into two pieces (neck and body) and carry it in a much smaller case which can easily be stowed in an overhead baggage compartment of just about any commercial airline. The removable neck also enables easy adjustment of the neck angle, not only during the build but at any point thereafter without resorting to any glue joint release.

I’ve also made a couple of simple bracing modifications to facilitate better response for the top. The ladder bracing and thickness of the top on these types of guitars is paramount in the production of the characteristic “Romantic” sound. However, there is still some latitude to work in shaping that sound to some degree. To that end, I have modified the bracing a bit, changing thickness and height and end scalloping, as well as positioning. I’ve also been experimenting with top wood selections. Sitka spruce produces what I like to characterize as a more “nasal” sound. The sharper or edgy basses are more in line with earlier instruments, perhaps more lute-like. My Alpine spruce tops produce produce a rounder, sweeter sounding guitar.

My guitars are loud. Unlike most of the instruments built, I employ a laminated side. These sides are not plywood, they are two pieces of spruce and hardwood glued together to form a very stiff set of sides. Along with the traditional laminated backs, I believe both contribute to the volume I’m able to get out of such a small sound box. While I can’t claim definitively that any one of these changes is contributing to any specific improvement, in general, my guitars are sounding pretty good. With that in mind I’m going to continue building in this configuration

Tuning one of these guitars equipped with Pegheads planetary tuning machines is a dream! Unlike traditional friction pegs where some players need to use both hands to tune, Pegheads make one-hand tuning easy. But more importantly, these machines are very sensitive. Micro tuning is really possible...your guitar stays in tune! There is absolutely no way I would trade these for a friction peg. If you are a traditionalist, I urge you to consider these machines. They look great and give you everything a friction peg gives you except the headaches.

In spirit, my guitars share some of the same cosmetic appointments of the originals. However, I have deviated some. My rosettes are aesthetically similar in that they are simple, monochromatic and employ lots of alternating black and white. I also embellish the headstock. Most of the simpler Lacotes have a single hardwood front and in some cases front and back plate. I’ve added a natural maple and another dyed black maple layer to the headstock layer to achieve that black-white-black sandwich look. It adds a nice touch to the headstock.

I also embellish the headstock. Most of the simpler Lacotes have a single hardwood front and in some cases front and back plate. I’ve added a natural maple and another dyed black maple layer to the headstock layer to achieve that black-white-black sandwich look. It adds a nice touch to the headstock.