One of America’s premier luthiers, Kenny Hill has been designing and building nylon string guitars for a very long time. He has invented and reinvented himself over the years, first building intuitively, then copying some of the masters: Torres, Fleta, Hauser, and Rodriguez, just to name a few. The Kenny Hill guitar line emerged after he started focusing on his own innovative designs and began building higher-end concert guitars. He also designed an entire line of high-quality yet moderately priced intermediate and entry-level guitars, which were built to his specifications by craftsmen in China that he personally trained. The facility where these guitars were created is one which he was instrumental in setting up. This is worth noting, as his relationship to the people who build his New World guitars is far from remote. 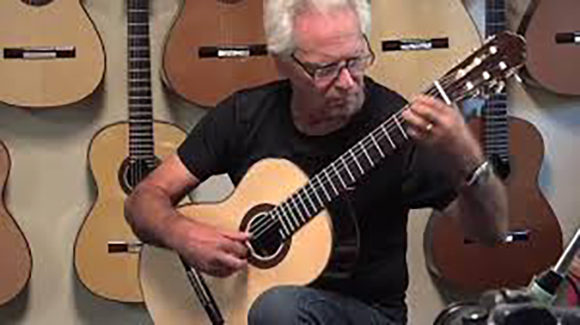 Whether it be a top-of-the-line Signature or Performance Series concert guitar built in California, an intermediate Player guitar, or an entry-level Estudio guitar emerging from his Chinese workshop. Kenny Hill guitars possess a magical quality that reflects the sensitivity and sensibility he’s acquired over his 40 years as a designer and builder.

I had the pleasure of traveling out to California and spending a day with Kenny in his Ben Lomond workshop. We talked about guitars as we toured the facility, and I got to meet the entire Hill Guitars crew. It’s very apparent how dedicated everyone is, as is their commitment to bring you the very best guitars possible. There’s a real sense of ownership and pride that’s shared amongst the team. I left the workshop feeling charged and ready to bring the entire line-up of Kenny Hill guitars to All Strings Nylon and now Marfione Guitars. So here we are, with a representative selection of fine Kenny Hill guitars for sale. We have something for everyone, and with more to come, you’re sure to find an instrument you’ll love.